ITM joins you on your trip
The Institute of Tropical Medicine in Antwerp (ITM) is looking for the causes of fever during travel to the tropics. Very often the causes remain unknown, because too much time passes between the fever and the visit to the doctor. A clear diagnosis is at that point impossible. Over the next two years, Dr. Ralph Huits and his colleagues will follow thousands of volunteers before, during and after their trips to Africa, Asia and Latin America. The ITM study is the first of its kind worldwide.

Fever while travelling should never be ignored. In the tropics, fever can be caused by malaria, abdominal typhus or dengue. But lesser known pathogens can also cause fever, such as the zika virus or Rickettsia, a type of bacterium.
“Tropical fever should not be compared to our well-known seasonal flu. When tropical parasites, viruses or bacteria are at play, fever while travelling can result in serious complications or even hospitalisation,” said Dr. Ralph Huits, coordinator of the fever study.

The more time passes after contamination, the more difficult it is to find out the cause of an infection in returning travellers. Earlier research by ITM professor Emmanuel Bottieau showed that the malaria parasite is the biggest culprit (the cause of the fever in about 28% of the cases), followed by viruses that are also transmitted by mosquitoes such as dengue (about 15%). Bottieau showed that the cause of fever in returning travellers is not determined in a quarter of cases. If the traveller had fever during his trip it proved nearly impossible to make a firm diagnosis.

The fever study: a unique follow-up of participating travellers

In order to obtain more insight into the culprits of tropical fever, the study participants will receive a brief introduction at ITM and will complete a questionnaire before their departure. They will also donate blood samples in order to facilitate research later on. Participants will receive a thermometer to take along. However, the most important thing is for them to learn to prick their finger themselves if they have a fever and collect a few drops of blood on filter paper.

“Placing a drop of blood on filter paper is like taking  a snapshot of the acute phase of the infection. With new technologies, the filter paper can be examined for the presence of the genetic material of pathogens weeks or months after travellers return. The snapshots taken while travelling, will allow us to make a firm diagnosis, for example, of dengue or zika,” explained Dr. Huits.

Without a snapshot from the acute phase, so-called indirect methods have to be employed at the lab. With indirect methods, antibodies that the patient produces as a reaction to an infecting agent have to be detected,  rather than the pathogen itself. Because antibodies are also found after vaccination or previous infections, the interpretation of their presence is often unclear.

A special service for travellers who participate in the study is the opportunity to ask ITM doctors for advice via phone or email in the event of illness when travelling. This is possible 24/7.
ITM hopes to register about 4,000 participants between now and August 2018. The Institute is working together with the University of Antwerp, Artesis Plantijn University College and Karel de Grote University College, but also with travel organisations such as Joker Reizen and Koning Aap.  ITM will use the study results to further refine its travel advice.

The ITM travel clinic: advice before departure, consultation upon returning

In 2015, 17,085 travellers asked for advice from the ITM before their departure and 6,687 of them returned for a consultation after they returned. Slightly more than one-third of returning travellers comes in for a check-up and has no symptoms. Approximately one in four persons who come in for advice say they have a fever or had one during their trip.

Participating in the study

We are looking for participants aged 18 and older travelling for at least 3 weeks to the tropics (Asia, Africa, South and Central America). If you want to contribute to the study or want more information, feel free to contact us by sending an e-mail to fever@itg.be.

Participant Hilde Vanheybeeck will go to Java and Bali 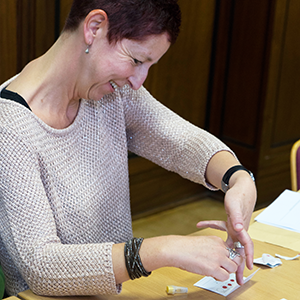 This summer, Hilde Vanheybeeck will be visiting the Indonesian islands of Java and Bali with an organised tour group. Together with five other travellers and a local guide, Hilde will first travel east from the west coast of Java. A bus and train ride will bring them past botanical gardens, volcanic craters, mountains, rivers and turtle beaches. In addition, the group will visit coffee and tea plantations, markets and temples.

After a few weeks, Hilde and her travel companions will board a boat to Bali. Along with snorkelling and enjoying the sea and beach, they will visit rice fields and a monkey park on the island. Quite an adventurous tropical trip!

“I lived in Saudi Arabia for several years and took diving trips to Egypt and the Maldives, but this is actually my first truly tropical trip,” says Hilde Vanheybeeck.

“Thanks to my training as a paramedic, I know a fair amount about the various health risks in the tropics. As a clinical laboratory tech I know how important it is to collect sufficient research material, which is why I decided to participate in the fever study. It’s great to be able to make even a small contribution to ground-breaking research, simply by going on holiday!”